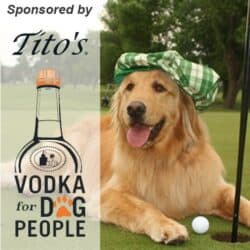 The Golden Retriever Rescue Club of Charlotte held its 19th annual Gene Fitzpatrick Memorial Golfing for Goldens event on Oct. 16, 2021 at Emerald Lake Golf Club. The presenting sponsor was Tito’s Handmade Vodka, Vodka for dog people. The weather was perfect for golf. The 36 golfers and volunteers had a terrific time. A sandwich lunch was provided by GRRCC and John and Lucie Gove.

A delicious BBQ dinner was provided by Jocks and Jills Sports Bar and Grill. The event concluded with a live and silent auction for many gifts, gift certificates and services that were generously donated by local businesses, sponsors and individuals. A HUGE thanks to all of the volunteers and the dogs who assisted in making the event a success! Thanks also goes to the GRRCC Golfing for Goldens organizational committee headed by Chairman Rick Gross, Co-Chairman Dick Griffin, John and Lucie Gove and Natalie Armstrong.

Donors for gifts and prizes

Donors for gifts and prizes (Continued)