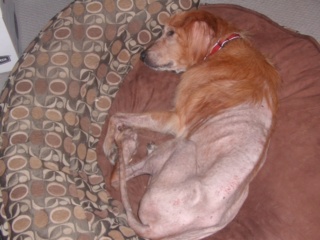 Although it sure doesn’t seem like it when you look at his picture, Boone is actually one lucky guy. He ended up at a rural shelter and, given his condition, was scheduled for a one way trip to the gas chamber. Fortunately a lovely woman stepped forward to be Boone’s Angel on Earth (AOE).  She happened to be at the shelter the day he was slated to be euthanized and something about him just jumped into her heart. Even though she knew his chances of survival were slim, within minutes he was in her car and headed to her vet.  Although the odds were stacked against him, she was going to do everything in her power to give him a fighting chance.  As you can see, Boone is beyond emaciated. In fact his BCS (Body Condition Score) was a 1 out of 5…defined as “Extremely Emaciated: Ribs, lumbar vertebrae, pelvic bones and all body prominences evident from a distance. No discernible body fat. Obvious absence of muscle mass.” He was also completely covered in fleas and ticks with numerous open sores and had yeast and bacterial infections secondary to flea dermatitis, severe malnutrition and general lack of care.  Numerous negative skin scrapings proved he did not have mange but rather that his extensive hair loss was due to fleas, ticks and sores. Amazingly, with just a few short weeks of care (and food!!) his coat is already, albeit very slowly, starting to come back in small patches.  Boone looks a bit like a walking anatomy lesson and needs to gain at least 30 lbs. He has essentially no muscle mass since his body broke down the proteins in the muscle tissue to ‘feed’ his brain, heart and other vital organs when he did not have enough food. While his ‘AOE’ nursed him pretty much 24/7, Boone very slowly started to come around. Within a week he could stand again and even started to take a few halting and wobbly steps. When it was clear that he had turned a corner and would most likely survive, his AOE contacted GRRCC to see if we could take him and give him the future he deserved. Not only did we say immediately YES, we said ‘heck’ YES.

We got Boone and quickly ran him to our vet to get their assessment of his condition and what we should do going forward. Although it may not sound logical, they said that other than coming very close to dying of starvation, he was in remarkably good health otherwise. Blood work was all good and the few values that were outside normal limits could be attributable to his depleted body and not organ failure or some other underlying condition. Their ‘prescription’ for Boone was to give him time, love and all the good quality food he wanted. He was taken to his foster home and immediately lavished with all components of his ‘prescription’ for his new life.

Boone continues to improve. Although he still sleeps much of the day, he is walking more and becoming stronger little by little, day by day. There is still a long, long way to go but he is taking small steps in the right direction. We are learning more about him every day and it gets better and better. He is completely housebroken, faithfully going to the door to be let out. He was wonderful with the other dogs and cats at his AOE’s house, although admittedly, he was so sick that a squirrel could have jumped on his nose and he couldn’t have reacted! He seems a little nervous of the other dogs that he sees on his short walks but that could very well be that that he knows he is too weak to defend himself if the other dog does not ‘come in peace’. It could also be that some not so nice dogs were unkind to him when he was foraging for food and survival. He was wonderful at the vet’s office…wagging his poor pitiful tail and smiling at them, regardless of what they did to him. He also rode perfectly in the car (although he obviously had to be lifted into it). He is just achingly sweet…resting his head on the GRRCC volunteer’s knee and looking into her eyes (tail still wagging) and occasionally placing a foot on her knee to remind her to continue petting him. He is also a beautifully ‘kind’ dog and if ever there was one, a gentle soul.

What is Boone’s story? Was he once a much loved companion (neutered when we got him, heartworm negative, obviously an inside dog) that somehow got separated from his family? Was his neglect (actually neglect at this level is closer to abuse) the result of one person’s cruelty and indifference? If he in fact was a stray, why did the scores, or possibly hundreds, of people that saw him (since it clearly took months for him to deteriorate to this level) choose to turn and look the other way? It doesn’t matter now because one person (Boone’s AOE) and all of us at GRRCC chose not to look the other way. It is good that dogs live ‘in the moment’ because Boone’s moments now are filled to overflowing with orthopedic dog beds, medicated baths, gentle hands, all the good food he can eat and fresh water he can drink, air conditioning vents and enough love for 10 dogs.  Keep lookin’ forward Boone…your future now is bright!

Please check back with us and follow sweet Boone’s progress…from the ashes will rise a beautiful Phoenix.